How does a plane fly?

Do you want to know how airplanes fly? Visit Flightdemy to learn all about commercial aviation

Home Blog How does a plane fly?

If you are new in the aviation world, perhaps this is one of the most frequent questions you have asked: How does an airplane fly? If you have ever wondered how an Airbus A380, with more than 300 passengers, can take off from the ground and stay in the air for several hours, in this post we will teach you about the forces that act on the plane and how lift is generated.

To understand a little more the aerodynamics behind the flight of airplanes, it is necessary to remember some concepts of classical physics such as Newton's Laws and Bernoulli's Principle, below we will explain very briefly what are the forces that act on a plane and how the necessary lift is generated.

Four forces act on an aircraft in flight: Lift, Weight, Thrust, and Drag

Forces acting on an airplane

When an airplane is flying, four forces act on it: Lift, Weight, Thrust and Drag. These forces allow a plane to fly from one continent to another at more than 10,000 meters in the air at speeds more than 300 kilometers per hour.

Lift and Weight are opposing forces that, when equal, cancel each other out. To understand this concept a little more, let's imagine an airplane that flies straight and level at 41,000 feet, at that moment its lifting force and its weight are equal in magnitude and, since they are opposing forces, the airplane will remain at the same altitude.

The same thing occurs with the forces of Thrust and Drag. When the plane flies straight and level, the thrust force and drag are kept in balance so that the plane maintains a constant speed.

The thrust is the force that allows the plane to move through the air, the engines are responsible for generating this thrust. It does not matter if it is a reciprocating engine such as that of a Piper Archer or the huge GE90 turbines of a Boeing 777, the engines are responsible for generating the necessary force to overcome the drag to the wind and in this way allow the air to pass through the wings so that it generates the necessary thrust to take off.

The engines generate the thrust based on the same principle of Newton's Third Law, they produce a force in the same direction of drag and a reaction of the same magnitude will occur but in the opposite direction, this is the thrust.

The engines generate the necessary thrust to overcome wind drag

This is a force that prevents the plane from moving, it occurs when it comes into contact with the air. The lower the drag, the lower the thrust required for the aircraft to move.

The drag of the plane depends on its shape, which is why Engineers work all the time to make planes more aerodynamic by requiring less power in the engines to take off. More aerodynamic designs will allow air to pass through more easily.

Which of these shapes allows better airflow and offers less drag?

This is one of the best-known forces, weight is the reaction of the mass of the plane to the gravity that exists on Earth. This force corresponds to the weight of the aircraft, fuel, passengers, luggage, crew, and everything else that is attached to the aircraft.

The weight of an Airbus 380 can be as high as 500 tonnes when taking off. To get 500 tons off the ground, a counterforce of greater magnitude will be necessary for the plane to ascend or, of equal magnitude to keep it at a fixed flight level, the force that lifts all this weight is known as lift. 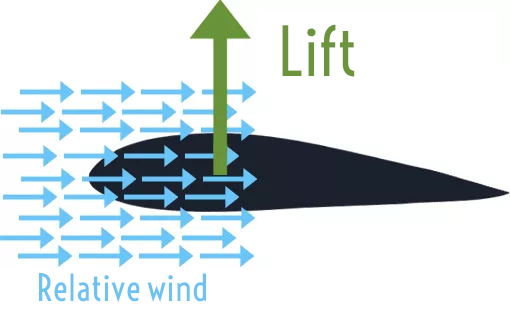 Lift force in the wing

Daniel Bernoulli published, in 1738 his book Hydrodynamica, an equation that describes the behavior of a fluid - such as air - that moves along a horizontal current.
This model of the behavior of the air will help us understand how lift is generated in the wings of an airplane.

Bernoulli's Principle helps us to understand the behavior of the air through the wing of the airplane. Aircraft wings are designed to accelerate the air that flows overhead. In this way, the air will have a lower pressure above the wing.

On the lower part of the wing, the speed is much lower so the pressure will be higher. As the force under the wing is greater, it will elevate in the air generating the lift necessary to carry an aircraft more than 10 kilometers in the air.

Find out about our offers and course launches through your email